We have a winner @bacnstrips! With a very close second place to @Nheafer! Congrats!
@bacnstrips was nice enough to do a write up on exactly how he solved the challenge:


This challenge covers a few different areas, including binary analysis, password cracking, stenography, and encryption. None of steps required in-depth knowledge of any particular area.

For this challenge I used Kali Linux. I found that almost the entire challenge could be solved with the programs contained in Kali Linux. The only required program Kali did not include was Open Stego. .

Once set up, I downloaded the evil.exe and looked at it's properties. Evil.exe is a Windows executable. What do we do with this file? I am pretty sure running a file called “evil.exe” is not something we are inclined to do. I started by using the Linux strings tool to look for clues and useful bits of information.

To make the results a little more manageable I set the -n flag to control the size of null terminated strings that are returned:

In the results I noticed:

Strings just revealed a user name, domain name, IPv4 address and a clue. A hex dump of the file might give us more information. This can be done either with:

Searching for the string “BETWEEN THE NULL BYTES” to quickly find a useful section of the dump. 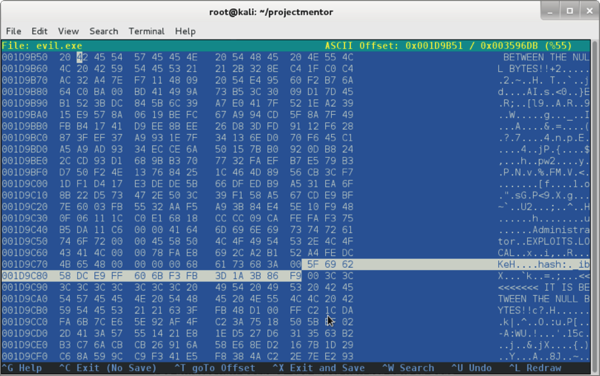 Looking at this portion the string “hash:” can be seen, and since the clue is “IT IS BETWEEN THE NULL BYTES!!” try looking for the null bytes (x00) in the hex.

The hash is probably a password, so that should be cracked but what type of hash is it?. Hash-identifier might shed light on possible hashing algorithms and hash-identifier returned: 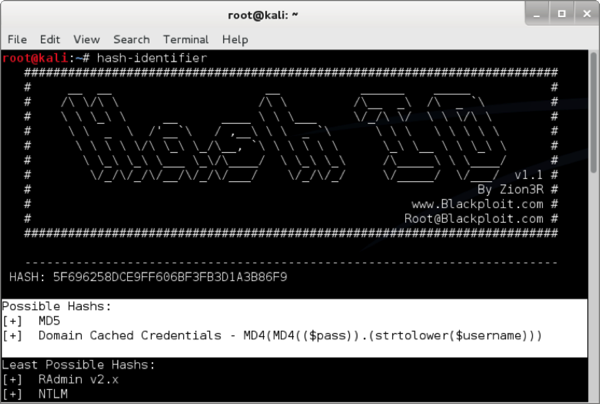 Because there is a user name and domain name, Domain Cached Credentials seemed like a good place to start This hash can be cracked using hashcat: 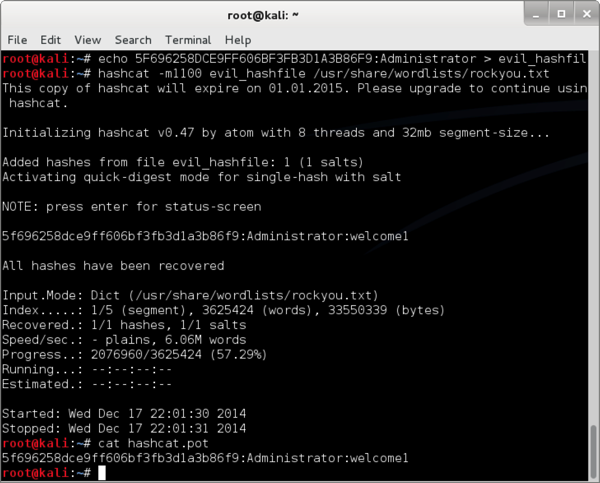 Or you could use John the Ripper: 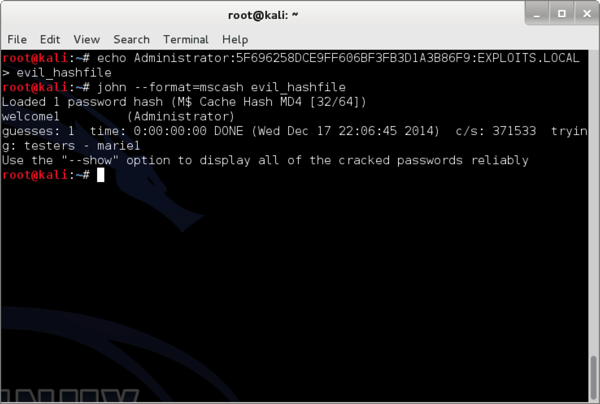 Both tools quickly revealed that the password was “welcome1”. Now I needed to find out what I could do with the password.

Opening up a web browser and going to http://104.236.163.121 shows a seemingly default web page. However the page does say that “somethings have been changed”.

Although it is hard to see in the screenshot, viewing the source revealed a commented out image tag for “shmoo_opensteg.png”. Manually browsing the image shows: 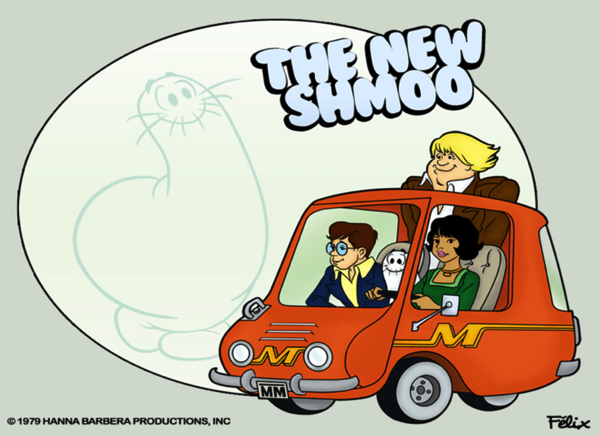 The filename says that stego is involved, which means we will have to extract something from the picture. Scalpel can extract hidden files, but in this case it did not recover anything useful.

Most stego tools usually have their own particular method of hiding data, searching Google for “OpenSteg” shows that there is an open source tool called “Open Stego”.

After downloading and installing Open Stego and providing the password “welcome1” a hidden file called “README” is extracted.

The README file was for pyFTPd a python FTP server, except with a couple lines added to the top. These couple of lines indicated that pyFTPd had been installed with default accounts enabled.

There it is, running on port 2121, pyftpd! Just needed the default account credentials to log into it.

Some of the disclosures contained the following excerpt from auth_db_config.py:

However there are no references to the plaintext version of these passwords. Time to crack some more hashes… A quick peek at the source code for pyFTPd to determine what hashing algorythm was being used revealed that MD5 was used.

After crafting another hash file and running it through hashcat or John the Ripper we get the following user names and passwords back:

Since test and user seem pretty uninteresting I started with the roxon account. 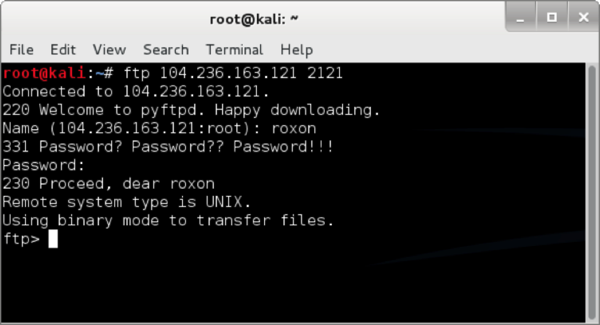 It Worked! The only file available was "Acrobatics Earthliest Subinfeudatorys Enchanted Creative Broad.data". Downloading it and opening it in a hexeditor gives us no useful information.
The file is not readable, it is probably encrypted. Looking closely at filename, the first letter of each word spells out “AESECB”. That is our next hint. While we don't know whether it is 128, 192 or 256 bit, there aren't that many to try.

First I tried using openssl to decrypt the file using:

When prompted for the password “welcome1”, results in an error… “Bad Magic Number” I tried a few other strengths of AES ECB but still no luck!

Searching Google for AES ECB Decryption tools, will lead to a few sites that will decrypt files . NEVER use a website to decrypt sensitive files! One off the sites (http://aes.online-domain-tools.com/) would accept the key in either plaintext or hex, but it automatically converted plain-text to hex in order to decrypt. This can be done using the –K flag and the hex equivalent of “welcome1”.
Attempting to decrypt results in the plain-text message when openssl throws an error, to eliminate the error, add the -nopad flag. With all of the flags, openssl gives the plain-text without any errors:

Congrats you have reached the end! Send a PGP encrypted email answers@projectmentor.net with this public key 33A45714258D9AC8

That's the final flag! The only thing left to do was send the PGP encrypted email.

Thanks a ton to @bacnstrips again for the great walk through. One other option to solving the AES encryption without needing to know the bits was with a short bit of python:

Which results in the exact same result as with OpenSSL

The challenge has yet to be achieved completely by anyone yet, and I have only received questions from 2 individuals so far, so the contest will extend until someone either gets to the end, or it's the day ShmooCon starts and I simply auction it off for Hackers for Charity funds.

As a possible way to spur things along, I will say that the exe contains two things that you _must_ have to continue on, an IP address and some sort of password in hashed form, and the password should be very simple to break so if you are wasting hours on it, try another format.
Posted by mubix at 7:44 PM

UPDATE: THE SERVER FROM THIS CONTEST HAS BEEN TAKEN OFFLINE, IF YOU WOULD LIKE TO CONTINUE THIS CHALLENGE PLEASE SEND AN EMAIL TO THE ANSWERS EMAIL ADDRESS

Also, in the spirit of Project Mentor, this is an OPEN contest in the sense that you should feel free to send in questions and expect non-misleading responses (not necessarily answers, but won't just say "Try Harder" either)

Thank you all so much for participating with Project Mentor over the time (intermittent that it's been) we've been running it.

If you don't know what ShmooCon, it's an amazing Infosec / Hacking conference held in Washington DC every year (usually Jan/Feb). You can find out more here: https://www.shmoocon.org/

They have a wonderful program called "Shmooze a Student" where a potential attendee pays $400 for the usually $150 ticket. This program takes the extra money and puts it towards getting a student that normally couldn't afford to go, the opportunity, and side cast to make it out to the con. You can find out more about the program here: https://www.shmoocon.org/shmooze_a_student

That brings us the the purpose of this blog post. Tomorrow is the last day to get a ticket to ShmooCon the regular F5 assaulting way. On Monday (December 8th 2014) I will post another Project Mentor challenge. This challenge will involve a few different Infosec topics. The person who submits the _most complete_ answer by Friday, December 12th 2014, will win the ticket and also be invited to present their walk through during the lunch time block at ShmooCon Epilogue.

If you are unaware of how Project Mentor works you can find out more here: http://www.projectmentor.net/p/what-is-this.html
Posted by mubix at 5:55 PM

Reverse Engineering is done for a number of reasons and on a number of different types of programs and products. Below is a link to an executable called "passwords_suck.exe". Your job is to tell me what the right password is, and anything else you can find inside that binary. There are many tools to do this so don't just get fed up with the complexity of IDA or other professional grade tools.

Please submit all answers or questions to:
answers@projectmentor.net